WE DID IT!  I have lived here for over 13 years and have wanted to get this boring brick painted since then. We have had so many projects over the years, and they were always more important than exterior paint.

So, when we got a bid on having the house painted, I realized we were not going to have the money any time soon, so I decided to just go for it!

I started out by practicing on my brick mailbox. Different brick but it gave me a chance to play with how I wanted it to look.

I used a 50/50 paint/water mixture. Painting on with a brush and wiping away with a rag. That was great for a small project with cool brick to peak through. Not for an entire house with ugly worm brick. 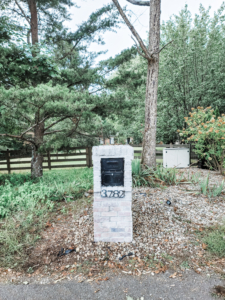 So, my shoulder has been really holding me back from getting things done like I’d like, but after months of hardly using it and finding some CBD Balm that helped, I decided to just start painting and pray my husband would feel sorry for me knowing I couldn’t lift my left arm above my head and would join in.

He said under no circumstances was I supposed to paint the house, well I’m not one to listen when it comes to projects. For example, 20+ years ago we had a wall between our living room and kitchen. After some reading and a trip to the attic, I could see it was not load-bearing. He said we would take it down next year when we had the money. He left for work the next morning I took a sledgehammer to it. Just put a giant hole in the center, cleaned up the mess, and waited for him to get home. Oh, that FACE when he got home LOL. He could not stand it, either the hole had to be patched or we had to just do it ourselves.  We laugh about it now LOL. I have no regrets! We more than doubled our money on that house and I learned a lot from the experience.

So first let me say I’m not a brick hater, but sometimes brick is blah and your house can disappear into the background. That was the case here. It screamed 1970 and the only way for me to change that was to paint it.

Prep: While most could just pressure wash their brick our pressure washer was broken, so I had to look for an alternative I could handle while hubby was gone and would not notice what I was up to. On the Green mossy gunk in the shaded areas of my brick, I sprayed with straight vinegar and then waited three days to rinse..it worked great! I then took a large push broom to scrub off dirt and a putty knife to get rid of the hard to remove mud dauber nests. 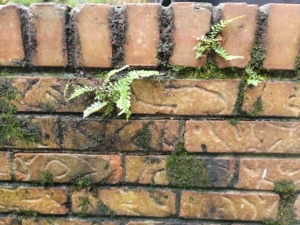 Paint it: I used Shabby Paints Great Greige diluted. 4 parts paint to 2 parts water. One coat covered everything, and we used purdy rollers for rough surfaces.

I now know that spraying would have been much faster and better on my shoulder. Live and learn, it was still done in a week doing a little every day before and after work. We had just had our windows replaced and had them wrap them in matte black. For now, I’ve opted not to replace the shutters. Got lots more to do to the front exterior but I am so in love with the progress a coat of paint made.

Until next time…Paint with Passion!

If you are new to my blog here are a few things you should know about me.

How to Install a Faux Brick and Age it

Black Interior Door with a ChalkBoard

Backsplash on a Budget 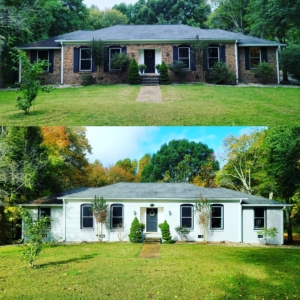 Free Shipping on all orders over $25.00. We ship next business day! Dismiss